Chapter 27
The grass waved slowly in the soft breeze. The air was cool and fresh. The squeaking wheels of the wagon seemed to have a healing rhythm. It was like a dream. A dream where it would end with Bear, and then you would wake up and feel so good and happy. Though with this, you didn’t have to wake up, you could stay forever.
Elmi felt a slight tingling in her fingers. A deep breath half-brought her back to reality. She noticed that she’d been dragging her fingers in the tall, soft grass. A dreamy smile drifted across her face. Soon, the rocking of the cart and the slow blowing air of the dark blue sky hypnotized her back into daydream-like bliss.
Annabel tried to think. About bear, about what she could say, about Grey. Her explanation to Mr.Corade was long with many interruptions. They stopped when Mr.Corade said he ‘got the idea,’ but all four girls were sure he had no clue what they just said. Suddenly, Annabel noticed she was bobbing her head along with the bumps on the road. This just made her try to be even more aware of herself. But, it was just impossible to do anything while rolling along the perfect fields of grass, and staring at the beautiful stars.


Della was drifting in and out of a heavy sleep. Kaylin was also exhausted, but was charmed out of rest by the tempo of Mr.Corade’s steps and the squeak, squeak, squeak of the wagon wheels. It wasn’t like she was awake, she was more in a peaceful trance. The squeaking stopped. The footsteps stopped. Or did they? The four girls melted into a pile of snores in the bottom of the wagon. Mr.Corade smiled, though he probably didn’t know why he was smiling.
Posted by Amelia at 14:44 No comments: 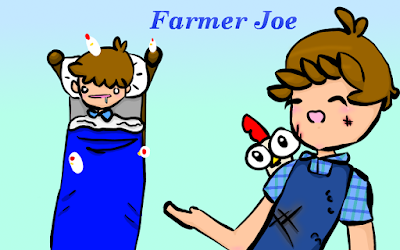 Hello! Did you know that Chicken has a human father? Farmer Joe owns the farm that Chicken was born in and Farmer Joe is very nice to all his chickens. Chicken does visit Farmer Joe, but he doesn't live with him. Chicken is kind of a free bird, you know?
Posted by Amelia at 14:29 No comments:

Chapter 26
The four girls all swiveled around at lightning speed, slapping each other with their hair. Except for Kaylin, who’s hair barely brushed her sisters. (Her dirty blond hair is only barely past her shoulders)
It was a young man, a very young man, actually. He probably isn’t a man. Younger than 18 it looked like. He was followed by a company of about a dozen youths. It was a curious thought to wonder how they all fit in that 4-person black motorboat.
The teen had a cool smirk on. “Are you that wannabe from the ice square? Because, tch, I would barely call that a gang.” He pointed at Elmi with a deep chuckle, and looked back at his group for approval. It seemed they all wanted to be as ‘cool’ as him, so they made an uncomfortable chorus of groans and laughs. It was certainly interesting.
“I-I’m not… I d-d-don’t u-um…” Elmi started, her face turning red.
“People like you’ll never join the Fresh Fireflies Group!” The leader announced again with an impressive fake laugh. A loud moan of “Yeah,” and “That’s right,” came from the crowd. They turned and left after their leader and one even kicked rocks at the puzzled girls.
Della was furious after they left. “Ugh, cool kids walking around being rude for no bread smackin’ reasons! Next time I see him, I’ll hit him over the head with a… with… with a boat!”

It was really getting dark now. “Okay guys,” Annabel said. “Let’s…”
“What?” Della asked. “Oh…” They all heard it now. A quiet squeaking. Elmi peered over a bush, eyes wide and gears turning in her head. There was barely a second in between, and she had launched off towards the sound.


The other girls leaned in to investigate, and found themselves following Elmi. They ran up to him and cute little Della even hugged him, the old, bent over man who was pushing a dirty wooden cart across the scraggly grass. “Mr.Corade! It’s such a relief to see you!”