Chapter 19
“Soo, yeah,” Navona muttered, kicking a pebble across the ground. The air was only beginning to warm up under the sun. Brandon was leaning against a tall, strong tree, the velvety leaves brushed his hands.
“You got banished because you stole a wooden peg?” Hal asked, incredulous.
“Well, it might not be as simple as that…” Kandel replied. “Oooh, there’s one!” He pointed at a bush full of plump, red berries. They were looking for breakfast and Kandel and Navona knew just what to eat. The four ran over to pick the treasure. Brandon’s itchy neck rubbed against the tree bark and pulsed with soreness. He ignored it when his stomach realized how long it had been since he last ate.
“I can’t believe we’re gathering with an alien… and a human,” Kandel grumbled.
“C’mon, Kandel,” Navona nudged him, angry, “we don’t know anything about them, they could be the nicest creatures you’ve ever met.”
Kandel was still suspicious. He pulled large bunches of berries from the bush efficiently, but aggressively. “Hey Navona, Maybe we shouldn't tell them a lot about us if… Navona?”
--<0>--
“I don’t think these guys will give us much information about our mission,” Hal whispered to Brandon. They had discreetly slipped away from the lourdwarfs to talk. Spy style.
“You’re just afraid of that candle guy,” Brandon argued.
“No really, they’re just a pair of rebels that stole a piece of wood and got banished,” Hal said.
“Wait,” Brandon said, pausing to think. ”If this Lord Coyote Bomsile is so smart and cunning, then why would he care about one wooden peg? He seems like a pretty careless guy, at least, in those terms.”
“You’re right,” Hal agreed, a smile forming on his face. “That means it was something important to him.”


“So, they were part of something important to him!” Brandon cheered, a bit too loudly.
Posted by Amelia at 14:10 No comments:

Chapter 18
“So, we’re lourdwarfs,” Navona started. She was sitting in mermaid pose, leaning against Kandel, who was sitting behind her. “You know what that is, right?”
“Yeah, yeah,” Brandon said.
“Well,” Hal looked over at Brandon with a look that said just get the information. Brandon pursed his lips. I guess he’s right, Brandon thought, we should learn as much as we can.
Brandon cleared his throat. “You could tell us about the gorillas and stuff.”
“Ah yes,” Navona clapped her rough hands cheerfully. She seemed to enjoy explaining things. “So, early on, there were no lourdwarfs. Our ancestors were called goblin-dwarves and they lived on an island in the middle of an ocean. One day, the island cracked three ways and became three.
Each new island had a goblin-dwarf tribe on it, and in time, they each floated to a different part of the mainland. One island developed into the Bright Lourdwarf Tribe. They grew tall and learned special things like metalworking, mapping, and basic medicine. Another island developed into the Moss Lourdwarf Tribe. They grew larger and learned special skills like farming, complex tree house building, and taming animals.
Later on, the Moss and Bright tribes formed an alliance, coming to the conclusion that the third tribe had perished. They lived together, creating a mixed city and villages for a while before they found the Gorilla Lourdwarf tribe. They had gone down a more wild path, getting smaller and green for camouflage.”
“Did they learn anything special?” Brandon asked.
“Umm…” Navona looked to Kandel.
“No,” Kandel said. “They act more like animals than Lourdwarfs.”
“Smart animals,” Navona added.
Brandon had noted that all through the story, they had not mentioned Magi-Land or how the Anges separated Lourdwarfs from the other species.
“So, there’s a city with both Moss and Bright Lourdwarfs in it?” Hal asked.
“Yeah,” Navona breathed, a dreamy look coming across her face. Kandel bit his lip and sub-consciously shook his head slightly. His wild hair ruffled when he did. It was light brown, bleached in areas. Navona’s was similar, but more of a darker brown that had a glow developing around it where full daylight spilled into the cave.
“Why are you guys here?” Brandon asked. “I mean, it’s not that close right?”
Kandel crunched up into a small ball and the look on Navona’s face changed suddenly to sadness. It was obvious to Brandon that whatever he had just said made them very uncomfortable.
“Hunting,” Navona blurted out.
“Exploring,” Kandel said at the same time. They looked at each other in concern.
“Mhmm,” Hal agreed sarcastically.
Kandel sighed and pursed his lips. Then he turned to Navona, “Exploring way out here would make more sense than hunting.”
“Wouldn’t we be mapping though?” Navona argued.
“Wait, wait, wait,” Hal said in a suspicious tone, “So really, why are you out here?”
Posted by Amelia at 15:20 No comments:

Chapter 17
The stone floor was as comfortable when yearning to hear an explanation as water tastes good when you are very thirsty. The tent bed provided a little protection from the cold stones and tiny pebbles that covered the ground. He was hardly bothered by the weary ‘gorillas’ marching out and grumbling, as he watched the lourdwarfs settle down.
“So, my name’s-” Brandon began, eager to begin the conversation.
“HMMMmmm!” Hal blurted out, unable to think of anything else to say. He just had to stop Brandon from giving out personal information like that to the species that they were spying on.
Brandon gave him a look to say It’s okay, what’s a name gonna do? Hal stared for a second, then rolled his eyes.
“As I was saying,” Brandon continued with a tone of annoyance, “my name’s Brandon. He’s Hal.” Kandel eyed Hal as if he were a disgusting new type of food. Then he squinted at Brandon. “Who-wh-what are you?”
“I-I’m a…” He looked to Hal for approval. Hal made a weird gesture with his hand that Brandon didn’t understand. He shrugged at Hal. “I’m a human and he’s a creature… oh.” He looked back at Hal, facepalming and shaking his head.
Navona sat up straight in surprise. “A Human? From Earth?”
“Y-yeah,” Brandon said.
“And a creature… “ Kandel mulled over the word, trying to recognize it. He looked very old at that moment. It made Brandon realize that the lourdwarf was certainly a few years older than Navona. “...what creature?.”
“The species is actually called a creature. It’s a species found in-” Brandon stopped himself this time. “A-another land.”
“What other land?” Navona asked, not trying to pry, just purely curious.
Hal waved his hand. “Eh, it’s a long story-” “Well, I wouldn’t mind-” Navona started before Hal interrupted her. “No, really, enough about us! We want to hear about you!”


The two lourdwarfs looked suspicious, but Navona’s expression soon changed to an enthusiastic look. “Oh yeah!” She turned to smile at Kandel. “I love travelers.”
Posted by Amelia at 15:00 No comments: 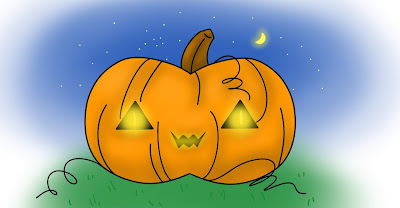 Happy Halloween! Woot!
Posted by Amelia at 14:30 No comments: