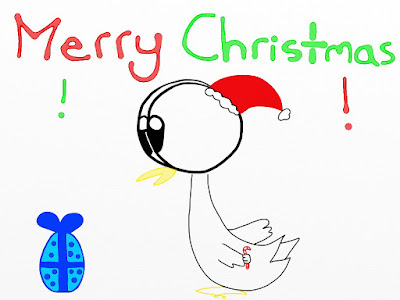 Merry Christmas
Posted by Amelia at 09:41 No comments:

Next post will be at Christmas. Have a great week and a happy almost Christmas.
-Amelia
Posted by Amelia at 17:56 No comments:

Email ThisBlogThis!Share to TwitterShare to FacebookShare to Pinterest
Labels: Home

How It Happened
By: Wizard Blair Smintery
How did this all happen? I get that a lot. I can’t tell the whole world so I, Blair smintery will explain to you in this mysterious book.
First off and answer to some of you Magi-land resident questions. Yes, I was the wizard that got Brandon the hero human here, helped him on his way to save our world and brought him back to his world. Another question I get asked a lot is if I liked him. Well, of course I liked him. I mean, he wasn’t the smartest boy, but he was fun to go on a short quest with. I really did think that I was going to die or my plan wasn’t going to work when the N.H.E.A. kept getting on to me. Brandon saw the world as reversed land and sky colours, that’s only for newcomers. Eventually he saw them normally like you and I. Well, let’s stop talking about me and start talking about why I got to be this famous, why Brandon and Hal got to be so famous.
It all started when people and all their species were close and happy with Magi-land. The humans had kings and queens that made the decisions for their world. Magi-Land, on the other hand, has a council of wizards. They ruled over the creatures(Little black circular animal that have so much fur hat it makes them look large, and they talk english), Soarpys (Purple bumpy rhino-like creatures that stand on their hind legs), Cyclops (Slugs with arms and legs that have one big eye taking up their face), Gorbies(Black, fat, and round bat-like creatures) other wizards, and many others. Humans then used wood as their supplies on earth. Magi-Land had always protected their nature, a thought of such things never popped into their happy minds. Eventually a human cut down a gentotree. At the time, the queen(a beautiful giant that is about twice the size of a human and is the most direct descendant from the royal family. She never ruled the land, because it would be more fair for the council to do that but she was protected and was there to have the forces of Magi-Land protect their world and the residents of it.) was trying to protect the gentotrees. The gentoridges from the tree attached onto her. Not even wizards couldn’t get it off and it was building up a form on her leg. Scientists from the human world figured out how hard of a substance it was and soon illegally cut down gentotrees.
After not too long, our amazing queen of nature was trapped in the gentoridges in a coma-like state until she was released. Many books have been written with different opinions on this case, but I can tell you the truth. Only humans could be the ones to save our queen, so I continued to usher humans over. Our queen’s mass of gentoridges was getting so bad that humans were banned from Magi-land and had their memories wiped of anything of our world. Sending the coin up was our only chance in getting our beloved nature protector back.
A team of mostly Soarpys was formed called the H.H.A. Helping Humans association. It went on for many years but never succeeded in it’s quest: clearing gentoridges. By that time, even gentotrees were hated by everyone that knew of them.
One sad year the leader for H.H.A. died and a new one had to be picked. In this case, the new leader didn’t get picked. He was evil and hated humans ever since he was little. Some members of the group left and never joined back,but that was only few. The new boss named Chaming was not charming at all. He believed humans were bad and only they could make things worse. He looked down on them as tiny, helpless, and damaging. For some things this is true, but for many, it is not. The member of H.H.A. got all green, angry and sad. Chaming continued to rule and the group was renamed N.H.E.A. No Humans Evil Association. They became more evil and more full of unnecessary hate.
Attacks were sometimes launched on Magi-land with the N.H.E.A. behind them. A secret defence group was formed called S.O.M.L. It tried to protect Magi-land and humans from the now bad association N.H.E.A.
That is, until brandon came. The human that I was waiting for. Our hero. He saved us all from anything bad and we await his return. 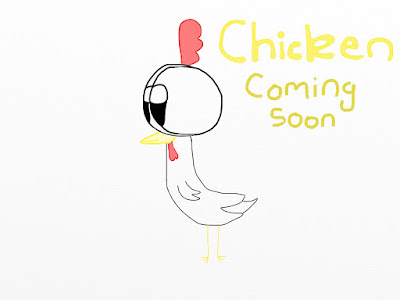 Chicken: Coming Soon.
Posted by Amelia at 18:29 No comments:

Out of the envelope fell a little copper coin. Brandon smiled to himself and went downstairs, leaving the coin on a little red cloth in his room.
THE END
Posted by Amelia at 09:51 No comments: