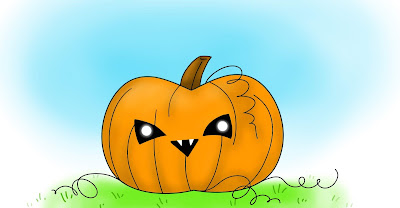 Halloween is so close! Woot!
Posted by Amelia at 13:41 No comments:

Chapter 16
“Those Little Buggers!” The voice cursed. Though the voice was deep, Brandon could tell it was a girl who saved him. He turned around to see a ginormous person, far taller than any girl he’d known.
She looked to be only a few years older than Brandon, but she was the height of an average woman. She was wearing a long, cardigan-like sweater with a ski-style pattern. She also had what appeared to be fur top hiking boots and a menacing spear which had a head that seemed to absorb the fading moonlight.
“Sorry, those are just gorillas,” The girl said, her tanned skin and freckles were visible where shafts of morning light streamed in the cave. She motioned toward the little green creatures who were laying in an exhausted heap in the corner of the cave. “They won’t bother you anymore.”
“Th-thanks…” Brandon said, still flustered. Another tall person, a boy, walked up and stood beside the girl. He held up his wooden rod (sharpened at the tip) to Brandon’s throat. He heard a howl of warning from Hal on the other side of the enclosure.
“Wh-Whoa,” Brandon stammered, tripping over himself as he stumbled backward. “We might be in some sort of misunderstanding…”
The girl just laughed. “Calm down, Kandel, this wee fellow is not going to hurt you.”
“You’re too unwary, Navona,” The boy, Kandel replied. He did not move his spear, he only grimaced in a suspicious manner. When he moved, the wooden beads on his sweater jingled against each other.
“And you are too skeptical of everyone,” Navona said with a tone of authority. Her sweater had many more beads than Kandel’s. She even had delicately carved ones as earrings. “Lower the spear, ally.”
Reluctantly, Kandel brought the spear back down to his side. Brandon rubbed his neck, glad it was still there in one piece. “So wha-wh-... who are you.”
Kandel pursed his lips and mumbled, “So, he’s not just a runt.” Navona nodded at Kandel. “Probably a traveler.” Then, she turned to Brandon. “We’re lourdwarfs. Not from around here are you?”
“Oh,” Brandon said, almost rudely. These are lourdwarfs.
“Hey!” came Hal’s voice, it echoed off the walls of the cave. Brandon turned to see him leaning over the drowsy pile of green creatures. “What are these things. Did I hear you call them Gorillas?”
“Yeah, well, yeah,” Navona replied. “They’re Gorilla Lourdwarfs. They’re a different type, y’know?”
“I’m afraid not,” Hal answered.
“Yeah, sorry,” Brandon added.
“You guys really are new here, aren’t you?” Kandel asked and Navona chuckled. 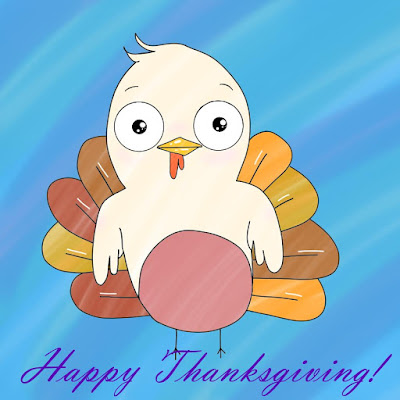 Happy Thanksgiving! (Possibly, depends where you live)
Posted by Amelia at 15:21 No comments:

Chapter 15
Brandon was still half asleep when he drowsily rolled in his uncomfortable bed. He heard a light shuffling echoing gently off the smooth cave walls. Of course Hal was awake before him. It was still dark enough that the young boy barely noticed a difference in light when he opened his eyes. It couldn’t be morning yet, could it? Why was Hal awake so early?
Muffled sounds of squeaky voices began to show through the soft sound of wind in the night. Who was Hal talking to? Brandon was too tired to listen. His hand patted the area around his bed, searching for a flashlight. When he finally felt the cold metal in his hand, he flicked on the light and the voices screeched in displeasure.
Out of the corner of his still blurry eyes, Brandon spotted Hal stirring awake under his blanket. Wait, if that’s Hal, then who’s…
Brandon shot upright, the large blanket flying into the air. His vision was clouded by messy, brown locks of bedhead, but he was alert and scanning the dark cave for any intruders. The bright beam of his flashlight settled on his squirming, moaning pile of his blanket. There were three noisy little lumps under his large bed cover.
With caution, and wielding a dangerous flashlight, Brandon approached the invaders and threw the blanket into the air. It revealed three slim, humanoid creatures that seemed to want to scream and howl. They proceeded to screech for a very long time. Such a long time, in fact, that Brandon began to lower his ‘weapon’.
As soon as he moved, they calmed down and began to stare at him as if sizing him up. He took this opportunity to properly look at them. Their clouded skin was a murky brown-green and they were only about as tall as an average 7-year-old. They were wearing nothing but a diaper-like loincloth and a simple triangle shawl. Both of which looked to be made of dusty animal skins and woven tall grass.
Their hair was sparse and thin and it waved gently when they nodded or shook their heads. Small patches of dark scales could be seen where shells began to form on their knees and back. They jumped and waved sticks with sharp rocks wedged in them, all the while crowing and screeching.
Something kept Brandon from being afraid of them. Maybe it was how short and child-like they looked. Maybe it was that deep down, he knew that they were just scared too.
Brandon gave them a soft smile and crouched down to their height. “C’mon, little guys, it’s okay!”
The green creatures continued to scream and jump around threateningly. “Out! Out! OUT!”
Brandon made a little chuckle. Their squeaky voices were as high-pitched and cute as their distressed squealing. “Aww, I’m sorry,” Brandon said. “Wouldn’t want to intrude on your little cave!”
This seemed to get the little green people angry. Brandon was about to apologize when all three of them leaped onto him. His knees buckled and he could feel cold feet on his head. He yelled for Hal as he felt a scratch on his leg. Hal ripped one off of him, but the critter he was holding wriggled free of his grasp and climbed onto him, setting loose hairs all over.
Brandon rolled around on the ground, feeling rips and scratches all over his arms, legs, and face. He grabbed a hold of a slim leg, but when he felt a drop of saliva, ready to bite, he released his grip. He couldn’t see properly in the chaos, he just felt himself scraping against the tent mattress and something pulling his hair repeatedly. These guys were tougher than they looked.


Brandon prepared to slash at one when it was ripped off of his back. The other one was tossed away and Hal seemed to be free from them too. “What happened?” Brandon asked. Hal just stared. The hair on Brandon’s neck tingled when he heard a voice very close, too close from behind him.
Posted by Amelia at 04:55 No comments: