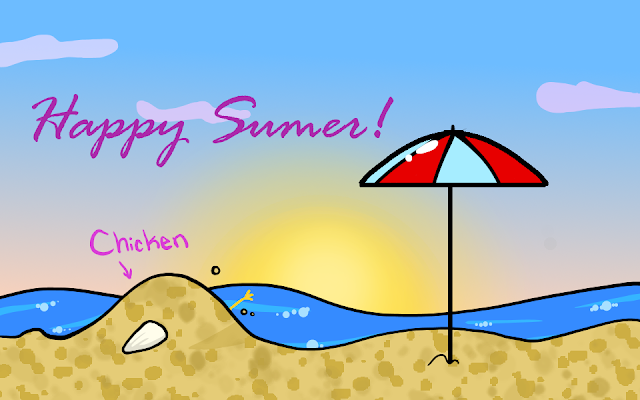 Happy Summer everyone! Wow, it's summer vacation already!
Hopefully, this means I can post more... anyways, enjoy the picture! (It might work as a postcard for anyone else that knows who chicken is) :)
Posted by Amelia at 16:44 No comments:

Chapter 5
“I don’t… what do you mean?” Brandon asked slowly. “I’m only… I wouldn’t have any better ideas than you do…”
Blair smiled weakly. “It’s not that type of thing. We need you to be our… spy.” Blair looked intensely into Brandon’s eyes. “You can control the gentoridges. We need you to go to Port Malocum - the ‘shelf’ where the lourdwarfs live - and figure out what they’re doing.”
“But, wouldn’t that be… dangerous?” Brandon asked slowly. Blair looked away quickly and shuffled his feet before finally answering. “It won’t be safe… sneaking into Malocum. Lourdwarfs can be very dangerous and unexpected.”
Brandon chose his words carefully. “If I were to go… how would I get there?”
Blair cleared his throat and pointed at the dripping rip in the tree.
“WHAT?!” Brandon screamed jumping away. “You’re expecting me to go in there?”
“Well, yes. Though, I can’t make you go.”
Hal shifted in the grassy ground and murmured, “Y’ was never really good about convincing.”
“Brandon, this rip only arrived here a few hours ago. Even over the time we’ve been talking it has grown. If the shelves mix, it will wreak havoc! Most Magi-Landers don’t even know who the others are! If the Anges get mad….We need your help to figure out what’s going on.”
“And when I do?”
“I trust that you have the power to stop it.”
“You’re afraid of change?” It was Hal this time.
“I-” Blair stammered.
“What if gentoridge magic could benefit us?” Hal argued. “We can take advantage of the Lourdwarfs! We would be strong with the Anges on our side. If they teach us how to-”
“DO NOT think of them that way. Sure, they’re powerful, but ‘great power comes with great responsibility.’ And magic?” Blair shook his head. “It is so rare to have helping magic. Black magic is just so easy to fall into.”
“Fine. But your other solution is to break into the land that you’re trying so hard to keep from this world? Your solution is to send a human? A HUMAN?”
“He’s right,” Brandon said sadly. “I-I can’t”
“Couldn’t you send something more logical?” Hal continued. “You can’t trust humans, they’re already destroying their planet!”
Wait, Brandon thought. Is this what Hal thinks of us?
“ENOUGH!” Blair commanded. His deep voice echoed through the forest. For a moment it was so quiet that Brandon’s ears threatened to start ringing. Hal and Brandon both shrunk back.
Blair’s eyelid was twitching ferociously, but there was a steady shine in his eye. “We have the best chances with someone who can safely use the power of gentoridges. If Brandon won’t stop the shelves from melting together, it would be more of a danger to send out anyone else.”
“Why?” Brandon’s voice was a shaky squeak.
“If we were send a scout-a spy to Malocum, they would easily take it as an act of war or preparation for an attack,” Blair replied. “Humans simply look like small lourdwarfs. And, I’ve been told by a… higher figure”
“And they have the powers,” Hal added. Was that jealousy in his voice?
“...yes.”
“I can’t say no, but… What if I… What if I die?” Brandon asked. Death was and odd thought to Brandon. The thought that one day, he would not be himself. “My family…”
“That is a ‘what if’ question. It can come with a ‘what if’ answer,” Blair said. “But if you must know… your family will never find out. As you know, time stops in your world when you come here. If you never come back, the soul that is living in your family and friends or anyone that would find out about your death, their souls would simply stop. Time would stop for them. It is possible that the souls would move into another version of them in a different multiverse where you live but…”
“They would never know…” Brandon repeated.
“If you don’t come back, they would not be,” Blair explained.
The only reason that Brandon wouldn’t help seemed selfish. There would be no one to mourn over him, no one to feel his loss. There also is that chance that he does come back…

Chapter 4
Once in early grade five, Brandon had fallen down on the pavement at school, trying to sprint after his friends. After a few seconds, it looked like there was a mini explosion of blood on his knees and arm. Some of the girls ran to get a teacher, and a couple little kids that were in the area started flopping around and yelling like a fish out of water.
The other guys were starting to ask the questions that people don’t really ask to make you feel better, it’s because they’re scared about what happened to you. Like “Can you feel it?” and “Are you okay?” Of course, he wasn’t! He was on the verge of crying - just, he could never to that in public.
That had been the scariest time in his life. Now, two years after, he almost broke the record.
On the other side of the tree, there was something that looked like a giant, black gash in the side of the tree. It was squeaking and dripping with black liquid full of gentoridges. It looked like a creepy mouth hanging, and drooling tar.
Brandon gasped at it in horror. He didn’t know why, but he stepped toward it and the world around him turned black. He tried to look back at Blair or Hal, but found that his muscles were frozen. He was slowly getting pulled into the horrible mouth.
He almost felt like he could feel cold teeth on his neck when he was suddenly pulled back by a strong arm and came into the light again. He could hear Blair and Hal’s blurry voices, but for a second he was completely in la la land.
“That was a portal to one of the other shelves,” Blair said seriously. “It was made when the lourdwarfs found out how to harness the power of gentoridges. That’s not natural. Lourdwarfs never had magic and could never use it. Now that they’ve found out this new power, they could be dangerous. It also seems like their use of it could be meddling with the separation of the shelves.”
Brandon was shocked, “What are you going to do about it?”

“What am I going to do? I think you are mistaken” Blair said slowly. “What are you going to do?”